I really wanted to call this article "That time we Patched things Up" (Patch Linden Remix) or something but it seems misleading and is too long to be a good, punchy URL.

Those of you that reached out after my scifi meltdown post, thank you yes, I am happy to report that my besty and I hung out again and she realizes I'm just an idiot so hopefully we'll coax her into more new adventures.

And ZOMG what an adventure she had for us today! 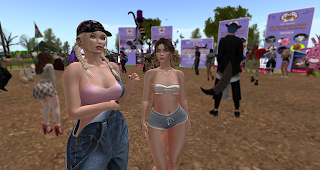 I had read that the Belli Passports would react to a thing that both Abnor Mole and Patch Linden would carry around but I had thought it was happening next month at RFL! Instead, at RelayStock, there they were large as life stamping passports!
So I had no idea what RelayStock was but my bestie said it was a thing she'd just got a notice about and also thought they had passport stamps so it seemed perfect and bam! I've never seen so many Lindens in one place and until today had only seen Moles as dots on some undeveloped lot. This was friggin awesome.
There was a competition between teams of Lindens, and this year a Mole team, and whichever team raised the least money got their heads shaved. Bald avies for (ok I missed the how long part). And who cares, they raised a TON of money and I know I had a blast and I got to hang out with the people who make this digital land I love.
So thank you gods for returning my friend.
and thank you Lindens and Moles for doing this awesome event! 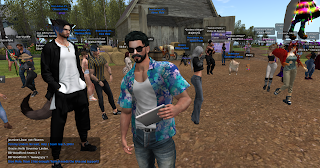 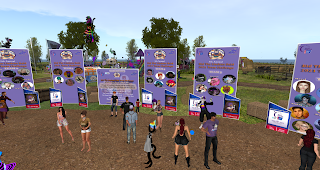 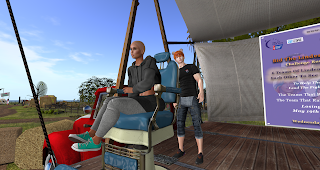 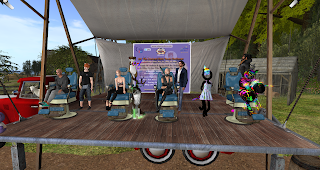 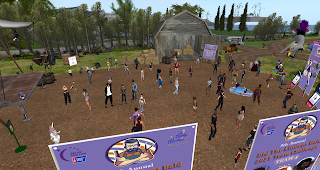 Let me add that the banter on the stream and in local was hilarious and I'm pretty sure we'll have another tornado-free year in Bellisseria;
[13:43] Patch Linden shouts: Donate to team #4 for a tornado free Bellisseria! 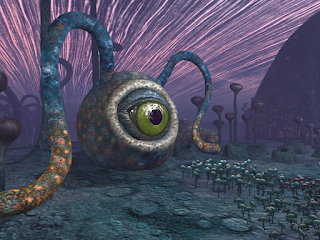 Planet is one of my favorite builds by Cica Ghost.  That is quite a statement given how much I've loved some of her past installations, but this one is really special. Here's the SLURL, go now, these pics will be here and her shows always end too quickly.  New characters, the same wonderful feel, that orange cat. I loved Sandy's little dome under the sea on Spongebob and this lets me experience that in an adorable little tranquil scene with that darned cat and the drying laundry and an adorable little girl, smiling even with the scary and not so scary things lurking outside. Love it.  Seriously crank up your settings and go see Planet , you will love it.

Coming Out in Second Life

I have been both looking forward to and dreading this post for a couple of weeks.  I should warn my readers that this will not be the normal SLuggle fare because most everything will be spelled correctly and there's a lot of smudges where I stopped to cry. In keeping with the poetry theme started with the last post, Tennyson anyone? I am a part of all that I have met. I've known this post was coming for a long time but never formulated the words. Ok, I still haven't formulated the words, I'm making this up as I go. Let's go back to nowhere-near-the-beginning for a sec- A while ago I offered someone a friend request and instead of friendship I got a life lesson. They replied that their typist is male, even though their avie is female and all her friends should know. I scrambled to friend request her again as quickly as I could after that. And it really got me thinking. A few weeks later I put my RL gender in my RL tab on my profile. I have been receiving a trickle of 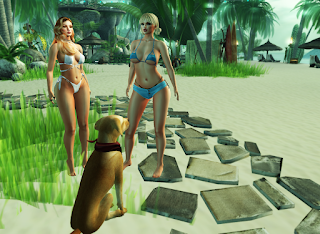 For us Northern Hemisphere types it's winter right now and I know parts of Europe are flooding and the Northeast US is getting plenty of snow, so if you are looking to get away to someplace tropical in your Second Life, we found your beach. They even have a dog I could pet! Cann!bal beach has been around a long time and they know how to beach. There are actually three very distinct beaches here- you land and get to pick. Here's a slurl to the landing area . Also, before I forget, their flickr At the landing area you choose between three locations- Cannibal, Cannibia and Oasis. First let me say they are all great. Cannibia is for pics and has a moody green fog for a volcano as well as beautiful spots to recline in by yourself or with your chum. It also has this pose for sunbathing, which as I pointed out to my friend is very important for avoiding tan lines under your bottom. Gorgeous, right? So that's Cannibia. Oasis is a desert oasis and it has a beautiful little area and