Ok so I REALLY hope Newser covers this because they are great bloggers and will have facts and details and stuff and they had one of their amazing bloggers there with us, but I'm not saying it was Gemma in case she doesn't feel like blogging it.

She did take a couple of nasty spills, after all.  We all did. and OMG was it fun!!

Ok so here's the SLuggle version. I log in at like noon and there's a brand new notice in one of my favorite social groups about a BBB embassy thing.

So I put on a gown and went and it wasn't a gown thing at all. It was a bus ride around someplace.

And OMG was it ever fun!!

I was thinking we were riding a bus to a party where my gown would come in handy, but again, I was mistaken and it was an embassy bus tour to get passport stamps. 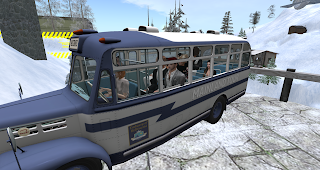 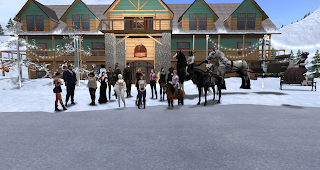 I stopped collecting stamps a while ago because, well, you all know me- adding another HUD to mess up is not going to help anything, I can barely handle changing the color on my couch. But I had such a good time anyway!!!

We had three buses full of wonderful people, and it was coordinated by my friend Yukiko Yeshto, who does a bus tour around various places and it truly is fun.

Because there were so many people, they had special guest bus drivers who bravely tried to steer rowdy stamp collectors around through winding roads and region crossings.

The bus I was on crashed into a copse of trees almost immediately and then it was the most hilarious series of spins and rolls and group angst ever. I laughed nonstop. Honest to goodness, this was so much more fun than a club, best entertainment choice I could have made.

We ALL had a blast, except the drivers probably, but I do hope they know how much fun they brought us all!

I think we had at least 24 people on the bus I was on at one point, it was FULL of names. I don't know how many of the buses finished the route, by the end we'd had at least one bus change and a couple of teleports from the edge of a region back on board, and people got off and rode horses and stole motorcycles and all kindsa crazy fun things.

It truly was a blast. Thank you BBB and thank you Yukiko!!

Here's a throwback to another of Yukiko's tours! 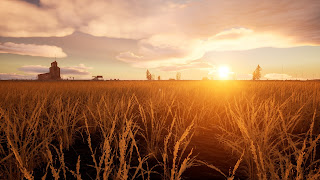 Full Steam Ahead, an Interview with Bryn Oh

In the virtual world Second Life , we've been spoiled by people who create things.  I have a virtual house that is full of beautiful furniture and an inventory with more styles and choices of clothing than I could ever possibly wear. The other day I rode around with my friend in her brand new car- a replica of the DeLorean from Back to the Future . We are truly spoiled by all of the amazing things that people make for us in our digital world. Most of these items are modeled from things in the real world, or from movies such as the DeLorean. The migration of ideas and design from the real world to the virtual one is endless. You can probably find many exact copies of things you own in the real world and own them in your Second Life too.  At last the stream is reversed and something is going from our virtual world into another realm. Second Life artist Bryn Oh has created one of her Art installations in game form. Lobby Cam is available  here on Steam. We've been spoiled to have 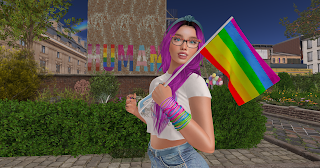 Celebrate Pride at Pride at Home

The Covid time was awful, but we got Pride at Home from it! It's a fantastic shopping experience and celebration of being human, regardless of gender, orientation, judgement. It's a beautiful place and fantastic vibe and it's back again for Pride month. Get here and enjoy the freebies, the great deals, the parade, the spirit. Slurl 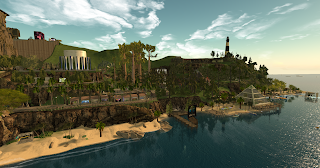 OMG this is so much fun. Seriously the last two days have been a blur and the days leading up to them were one too as I waded into helping out wherever I could getting NatureCon off to a smooth start. Yukiko Yeshto and Soull Starlight have created a really fun and cool conference with NatureCon 2022 and I really hope you'll come be a part of it! NatureCon is happening from now until Aug 31 with all kinds of cool events still to come. Today alone there were three different DJ parties, an incredible dance performance and both Lab Gab and Designing Worlds filmed shows there. It's truly a thing you don't want to miss. There are a lot of things going on and I'd hate to miss some so let me point you to the NatureCon Blog  and  website  for details and things about when stuff is going on but trust me there are shows and interviews and DJ sets galor this weekend and on through the week. The best bet is to actually join their in-world group   because there are lots of new chang